What to do when your agenda gets hijacked

Sometimes, when you’re facilitating a meeting or running a longer session at work, your carefully worked-out sequence and structure can get thrown off course by the people you’re with.

A point gets raised, for example, that you wanted to cover after lunch but suddenly it’s all everyone can talk about. How do you get them back on track while still keeping in the flow?

If you are on your way to an important talk, you want to start developing - from the moment you close your front door - a more than usually heightened awareness of what’s around you. Start paying attention to your journey from that first moment all the way up to your arrival at the destination. Once you are there, keep listening and observing. Make a point of shaking people’s hands, introducing yourself and paying attention to the things people say to you. Absorb it all.

Presenting is always about being part of a conversation. Even when it’s just you speaking, you are throwing out thoughts and ideas for others to engage with and respond to. That response doesn’t always come immediately or explicitly – people tend not to heckle TED speakers for instance. But it’s still there, in the energy of the room, the way people listen to you, in markers such as laughter and applause and the quality of attention people offer you.

When you’re making a public speech, it’s perfectly normal that you set the agenda and move through the structure of your content as you’d planned it. But very mindful speakers will still leave themselves open to modify what they say - even in the moment of saying it - perhaps to draw a connection with something someone else said just before them, to refer to something very topical or even to disagree or qualify their own pre-planned words. And this is an exciting thing to see when it happens, because suddenly we are no longer witnessing a mere recital, but actually the free play of a person’s mind.

But all that, of course, seems a world away from this tough meeting that you are trying to run. You have been tasked with getting through eight or ten key discussion points by lunchtime, but you are already miles behind because people are insisting on arguing about point 4 when you haven’t even finished your intro.

You’re in charge and you have to call it. But you also have to listen. The group are clearly telling you that point 4 is their foremost area of concern, so you need to show that you understand that. I would try to deal with point 4 first and shuffle your order if possible, because now that this contentious topic has been raised it’s unlikely that the group will be able to concentrate on anything else.

If that seems too problematic, perhaps because for your purposes you need to stick to a more linear structure, then at least put point 4 in the context of the group’s concerns. ‘Now I know there’s a lot to discuss in relation to -- I want to hear what everyone has to say and I promise we’ll get to it very shortly. But I really think we’ll have a more fruitful discussion about if we can just agree an approach regarding first.’

The elephant in the room

Another issue that can disrupt your flow is where the point that needs most talking about isn’t on the agenda at all.

Say, for example, you’ve been tasked with trying to understand why a complex project is falling behind schedule, and your job is to get everything back on track. You have a long list of milestones and deadlines and project dependencies to discuss, but you’ve barely started when you sense that what the project group wants to talk about is a completely different topic altogether. 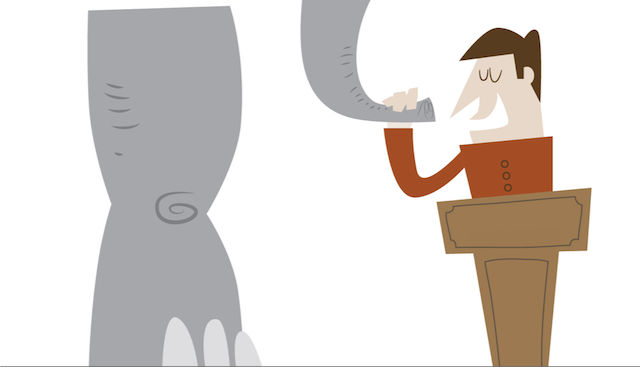 You’d set up what you thought of as a working group, but the group – recognising a rare moment to air and share a pressing concern – naturally starts to see the set-up more as a forum or even a therapy session. Something is bothering them, something that needs to be heard properly, and unless you address this concern you are unlikely to make much headway with your own agenda.

Often, though, the issue won’t come out directly, especially if it’s a delicate one and the group may not have even dared discuss it openly before. You need to be alive to this specific set of people, to make them feel that they can talk in safety and confidence within the group. Be alive to nuances of language and behaviour, and be prepared to dig a little. Sometimes people will say something a little cryptic – ‘well that’s not actually what happened’ – because they’re just dying for someone to ask them, ‘What do you mean?’

By picking up on those cues, you will uncover what’s really going on. Perhaps there’s a feeling that the project timelines are unrealistic. The software isn’t fit for purpose. Another team isn’t pulling its weight. The behaviour of a particular manager is unreasonable, or worse. The issue may well go beyond your remit. It may well be something you can’t fix. But you can at least create a safe space where people can air their concerns, and promise to pass them on to the appropriate parties.

It’s key here to develop your active listening skills. This is something you can actually practise with family and friends. Try to observe and hear what’s going on without getting involved in opinions. Be aware of subtle cues and signals; learn to notice and tackle the unsaid. Some gentle probing – playing back what people say using slightly different words until it resonates – will help you uncover what’s really going on.

None of this may have been your priority for the session, of course, but if there’s an elephant in the room and you don’t address it, your day is likely to be scuppered anyway. So acknowledge and deal with the greatest area of concern first. Recognise that it’s not just you and your list of points you’re dealing any more, it’s you and a group of other humans.